As an affiliate, we may earn a commission from qualifying purchases. We get commissions for purchases made through links on this website from Amazon and other third parties.

If you’re looking for a way to protect your hearing while you’re working or studying, then Hearprotek earplugs might be the perfect solution for you. In this post, we’ll take a closer look at these earplugs and see what makes them so special.

We’ll also discuss some of the benefits that come with using them, so read on to find out more!

Hearprotek are an online company that promises to make “high-fidelity earplugs” at an affordable price.

If you’re anything like me (or any other musician, concert-goer or music love) that’s had much experience with earplugs then you’ll know that this is a bold claim.

Yes, earplugs can produce high-fidelity audio. And yes, they can be affordable.

However, very rarely, if ever, can they be both at the same time.

So can Hearprotek really live up to this bold claim?

To find out I’ve put two of their products – their moldable silicone earplugs and their high-fidelity concert plugs – to the test to find out if Hearprotek have truly delivered on this bold claim.

Without waiting any longer, let’s dive in. 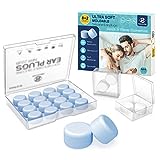 The moldable plugs come in small, hockey puck-shaped discs and in a box of twelve giving you six pairs.

You have to roll each puck into a ball and then gently press them into your ears to create a seal which then reduces sound.

Hearprotek claim this reduces noise by up to 22db and I have to say, it feels like they are pretty spot on with this claim.

I used a pair when going to see a local band play and I came away from the gig with no ringing or fatigue in my ears.

Of course, they is some loss of fidelity with this model of plugs because they don’t have a filter but, considering that these are the cheapest option and that they do genuinely provide molded protection at an affordable price, this isn’t really a problem.

On the subject of high-fidelity audio, this type of earplug is never really designed for this purpose anyway so to criticize them for losing a little high-end feels unfair.

These plugs are also water-proof, reusable and only $7.99 on Amazon.

All things considered, these are a great deal!

This set is really where things get interesting.

They cost a mere $14.39 on Amazon and for that small fee, you really do get so much!

They provide 20db of noise canceling and they live up to the claim of preserving the quality of audio that reaches your ears naturally.

I tried them in a number of settings – listening to the TV at home, at a local gig, during a rehearsal and even just walking around in the street – and it felt like having my normal hearing but at a lower level.

They’re also very discrete because they look like regular earbuds. And they come in a handy little pouch with no logos or identifying marks.

Seeing companies think about what it will be like for consumers to carry around their products rather than treating the consumer as just another time to advertise is always a nice thing to see. Kudos to Hearprotek on that front! 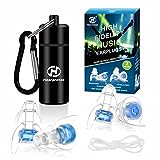 If you’re looking to protect your ears or the ears of your child as they start going to their first concerts then I’d highly recommend Hearprotek earplugs.

They’re affordable, they live up to their claims of protecting your ears without ruining the listening experience, and most of all, unlike molded IEM’s, you won’t be worrying about losing hundreds or even thousands of dollars if they get lost of broken.

All in all, within their category of product, you’d be a fool not to look at them seriously!